Americans stopped buying homes in 2018, mortgage lenders are getting crushed, and an economic storm could be brewing

As 2018 headed toward its close, Americans’ appetite for buying homes fell off a cliff.

In December, US existing-home sales cratered to 4.99 million, 10.3% below the mark from the year-ago period, according to data released earlier this week by the National Association of Realtors.

That’s the steepest decline in more than seven years, and it followed year-over-year declines of 7.8% in November and 5.1% in October.

Home sales dropped in every month in 2018 except February, but the trend grew more aggressive in the final quarter of the year. 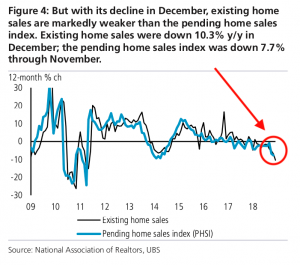 The decline has been broad, affecting every US region. Even home sales in the posh Hamptons got battered in 2018.

Banks with large mortgage-lending businesses felt the homebuying malaise take a bite out of their bottom lines last week during fourth-quarter earnings results.

At two of the largest bank mortgage originators and servicers in the US, the numbers were especially pronounced.

At Wells Fargo, mortgage-banking income fell by 50%, to $467 million, in the fourth quarter, while originations declined by 28%, to $38 billion.

These ugly housing numbers have raised red flags for Wall Street investors and analysts. UBS economists said in a note this week that “the deterioration in housing and its intensification since midyear raise the possibility of underlying weakness in the household sector.”

It’s too soon to head to the panic room, as this trend could prove a small bump that smooths over in 2019 — but a deeper drought in housing is dark news for just about everybody, not just the banks.

Significant housing declines have foreshadowed nine of the 11 post-World War II recessions in the US, according to another note by UBS from December examining the housing slowdown.

“The housing market usually does not slow down in a vacuum, and a falling housing market may well be the first indication of broader economic weakness,” the bank’s analysts wrote.

The US economy has been exceptionally strong in the past year — we’ve had wage growth, low unemployment, and low delinquency rates, among other positive drivers that should augur well for real-estate investing, UBS said.

So what happened to the housing market? The most glaring explanation is that mortgage rates increased, convincing prospective homebuyers that the market had become unfavorably expensive.

That November figure may not seem a gigantic increase from the average rate of 3.65% just two years ago, but for a $250,000 home, the difference in the monthly payment is $190 and the lifetime cost is nearly $70,000 greater.

But interest rates don’t tell the full story — UBS analysts estimated that rates accounted for roughly half of the slowdown.

Home prices have also been ascending for years. The median existing-home price in December was $253,600, a 2.9% increase from 2017 and the 82nd straight month of year-over-year gains, according to the NAR.

Cash-strapped and saddled with student loans and other debt, millennials — a generation of more than 70 million now in their 20s and 30s — have delayed buying a home later than their parents did, but their participation is crucial in buoying home sales.

They may be balking at the higher monthly payments commanded for increasingly pricier homes and deciding they’re better off renting.

“They need to be in the housing market to keep things going, but they face real affordability challenges,” said Jody Shenn, a vice president in structured finance at Moody’s. “Just being able to get a house they can afford on a monthly basis with a mortgage is on the challenging side at this point.”

But the debt-burdened millennial didn’t materialize in 2018. That long-standing trend is most likely contributing to the overall slowdown, though it doesn’t necessarily explain the precipitous drop in fourth-quarter home sales.

Other factors that may have had an impact but are harder to pin down are rising construction costs, a reduction in the mortgage deduction in the new tax law, tightening credit standards by some lenders, and less flexibility in underwriting.

If profits are down, why are lenders rejecting more mortgage applications?

Curiously, despite less homebuying demand and falling revenue, the rate of rejections of mortgage and refinancing applications also shot up in the second half of 2018, according to data from the Federal Reserve Bank of New York.

In its “Credit Access Survey,” a quarterly report on US borrowers, the Fed found in October that even as mortgage applications among those surveyed fell to 6.7% from 9.2% over the previous year, the portion of respondents who experienced a mortgage application rejection increased to 19% — the highest mark in the survey since February 2015 — from 15.6%.

Charge-offs have been on the downswing, though, suggesting lenders have been doling out credit responsibly in recent years.

“The squeeze on mortgage originators is encouraging them to move down the credit spectrum, but it’s a slow, measured shift,” Warren Kornfeld, a senior vice president covering financial institutions at Moody’s, told Business Insider.

But it could still be the case that lenders experienced an influx of applications from borrowers they deemed too risky to lend to. The Fed has telegraphed its rate hikes, so savvier and more creditworthy borrowers may have acted earlier to get a cheaper mortgage rate.

Borrowers applying at the peak were “probably more desperate,” Fairweather said, and banks don’t typically like to lend to people in desperate situations who have a higher chance of defaulting on their loan.

“My interpretation of this is that there was a decrease in the quality of applicants at this time,” Fairweather said.

Overall lending standards may not be any stricter, Shenn added, but “it could be the mix of who’s coming in the door has changed.”

Riskier borrowers may have grown more interested in buying a home, but in general the number of consumers who say they think it’s a good time to buy has been declining since 2014, surveys from the University of Michigan and Fannie Mae have found.

As UBS pointed out, that’s happened only twice in the 26 years those survey questions have been asked — and those instances preceded our two most recent recessions.

A housing collapse isn’t imminent, but there’s no quick fix either

There’s no quick fix for consumers feeling stretched too thin to buy a home, according to Kornfeld and Shenn. Costs and rates have to fall, or wages need to increase, or some combination thereof.

Mortgage lenders face a bleak horizon this year. Their profit outlook fell for the ninth straight quarter and reached an all-time low to close out 2018, according to Fannie Mae’s “Mortgage Lender Sentiment Survey.”

But a housing collapse is by no means imminent, especially in light of the strong economic fundamentals at play right now.

Consumer spending hasn’t flatlined elsewhere, and, as previously mentioned, unemployment and wage growth are trending in the right direction.

Fairweather said that she anticipates another strong year for the economy in 2019 and that she’s optimistic buyers will have an easier time and more leverage in negotiations this year.

Still, amid a steady housing decline and following the especially ugly numbers from the fourth quarter, analysts are on alert, and UBS said it would be tracking the trend closely this year.

“The incongruity of the spending on housing with the rest of the economy is a red flag,” the bank’s analysts wrote. “Unwillingness to spend on large, long-lasting items like housing may signal susceptibility of consumer confidence and spending to adverse shocks.”

businessinsider – Barbara Smith Miami leads the US in mortgage delinquencies for the top 10 metropolitan areas, as reported by CoreLogic on Tuesday in their monthly loan performance findings. Roughly 14% of mortage payers in the city were behind 30 days or more in payments. New York and Las Vegas took the No. 2 and […]

By Kristine Hansen | Aug 4, 2020. Realtor.com This isn’t the only floating home in the Pacific Northwest—but it is the only one with outer-space vibes. On the market for $850,000, this futuristic-looking home on the water is described in the listing details as “Portland’s most iconic and famous floating home.” This 3,000-square-foot, three-bedroom home floats off the […]

This is an example of one of the contract you need to fill to buy and/or sale a house: "AS IS" Residential Contract For Sale And Purchase

This is an example of one of the contract you need to fill to rent a house: Residential Lease for Single Family Home and Duplex